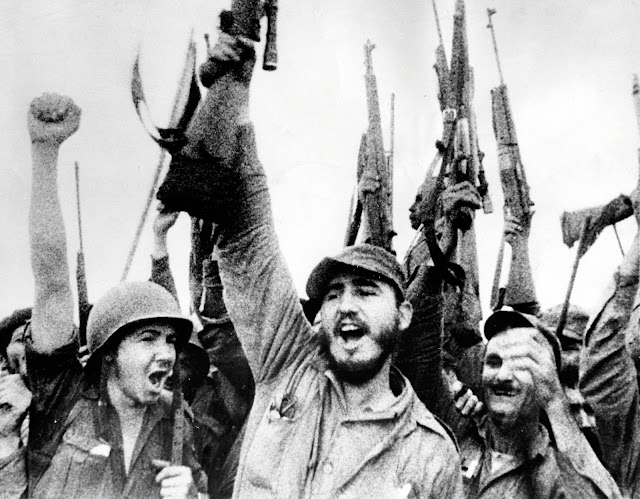 May, 1955 - Castro, who stated "History will absolve me" at his trial, is given amnesty and leaves prison for Mexico.

December 2, 1956 - Castro and 81 other would-be revolutionaries land in Cuba on the yacht "Granma.". Most are routed, but 12 survivors -- including Castro, his brother Raul Castro and Argentine Ernesto "Che" Guevara -- regroup in Sierra Maestra mountains where they launch a guerrilla war.

January 8, 1959 - Castro enters Havana after triumphal journey across Cuba. As supreme "Comandante" of the armed forces, he begins the political, economic and social transformation of Cuba, launching agrarian reform and nationalizing most foreign and local businesses.

August 14, 1993 - Castro government ends ban on use of U.S. dollars, one of a series of limited economic openings that government says are aimed at saving revolution.

August-September 1994 - More than 35,000 people leave Cuba in flimsy rafts and boats during summer crisis, prompting a migration agreement with the United States to allow a minimum of 20,000 legal entry visas to Cubans annually.

June 12, 2002 - Castro leads march by one million Cubans along Havana waterfront in campaign to defend socialist system in face of growing dissent and U.S. pressures.

July 31, 2006 - Castro forced to hand over the reins of power to his brother Raul after undergoing emergency surgery to stop intestinal bleeding caused by undisclosed illness.

Dec 17, 2007 - Castro hints he will not cling to power or block rise of younger leaders in message read on television.

Feb 19, 2008 - Almost 19 months since he last appeared in public, Castro said he would not return as head of state and government.

March 22, 2011: Fidel Castro confirms he no longer holds any official title. Pens a series of columns over the following years.

December 17, 2014: Fidel Castro remains out of sight as Raul Castro and US President Barack Obama announce the normalization of relations.