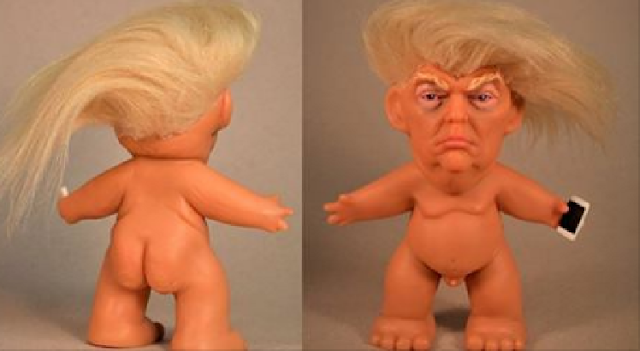 He turned to Kickstarter in order to crowdfund mass production of 45th US President Donald Trump's naked troll doll.

After Trump took Oval Office, US streets are hit by daily protests against him due to his extremist and radical policies.

Trump Profile:
Donald John Trump is an American businessman, television personality, politician, and the 45th President of the United States.
What is Crowdfunding:Crowdfunding is the practice of funding a project or venture by raising monetary contributions from a large number of people. Crowdfunding is a form of crowdsourcing and of alternative finance. In 2015, it was estimated that worldwide over US$34 billion was raised this way.

Although the concept can also be executed through mail-order subscriptions, benefit events, and other methods, it is now often performed via Internet-mediated registries. This modern crowdfunding model is generally based on three types of actors: the project initiator who proposes the idea and/or project to be funded, individuals or groups who support the idea, and a moderating organization (the "platform") that brings the parties together to launch the idea.

Crowdfunding has been used to fund a wide range for-profit entrepreneurial ventures such as artistic and creative projects, medical expenses, travel, or community-oriented social entrepreneurship projects.