Trump's America Rejects You. Embrace to BRICS to Teach Him a Lesson 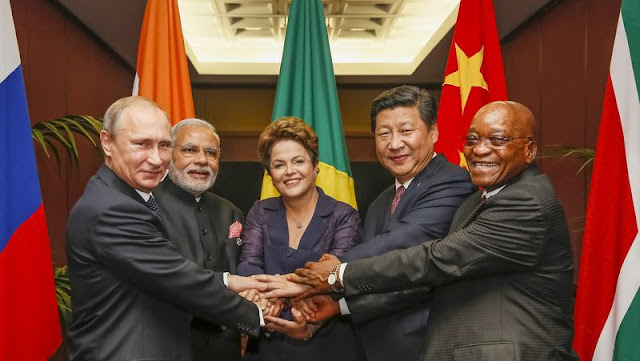 BRICS is the acronym for an association of five major emerging national economies: Brazil, Russia, India, China and South Africa.

Originally the first four were grouped as "BRIC" (or "the BRICs"), before the induction of South Africa in 2010. The BRICS members are all leading developing or newly industrialized countries, but they are distinguished by their large, sometimes fast-growing economies and significant influence on regional affairs; all five are G-20 members.

Since 2009, the BRICS nations have met annually at formal summits. China will host the 9th BRICS summit in Xiamen in September 2017. The term does not include countries such as South Korea, Mexico and Turkey for which other acronyms and group associations were later created.

The five nations have a combined nominal GDP of US$16.6 trillion, equivalent to approximately 22% of the gross world product, combined GDP (PPP) of around US$37 trillion and an estimated US$4 trillion in combined foreign reserves.

Overall the BRICS are forecasted to expand 4.6% in 2016, from an estimated growth of 3.9% in 2015. The World bank expects BRICS growth to pick up to 5.3% in 2017. The BRICS have received both praise and criticism from numerous commentators. Bilateral relations among BRICS nations have mainly been conducted on the basis of non-interference, equality, and mutual benefit.