The Circular Flow of Income

By Ahmed Xahir March 03, 2013
Definition
The Circular Flow of Income (CFI) refers to the continuous circulation of income and expenditure among the economic agents.

A Closed Economy
The following illustrates the CFI through a simple model of an economy, which excludes the Government Sector and Foreign Trade Sector. 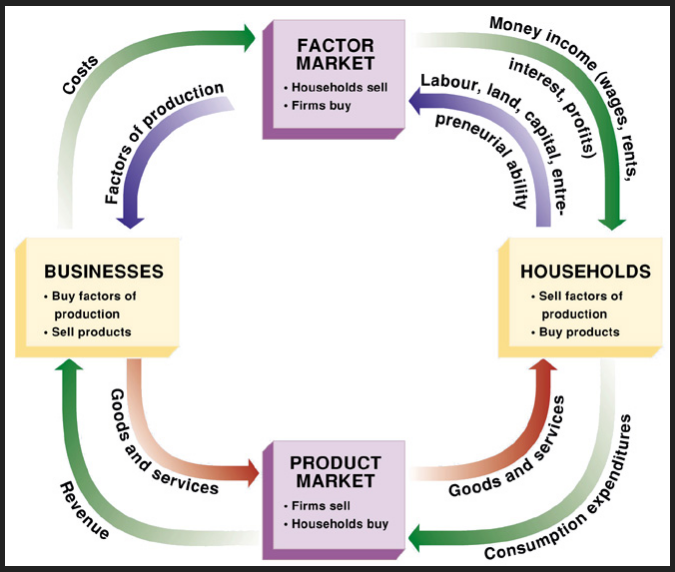 A More Realistic Model
The following diagram illustrates the CFI in an economy with Households, Firms, the Government and Foreign Trade Sectors.
Remember, the four sector model includes the income withdrawn from and injections into the economy. 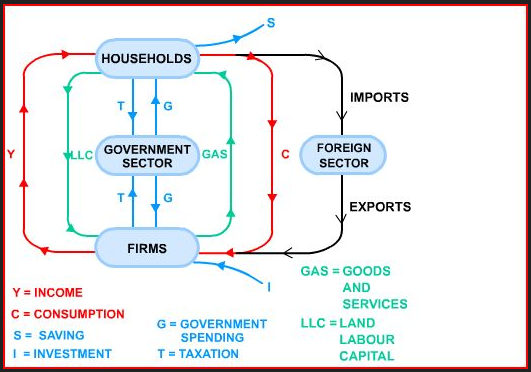 The following assumptions will help you to study the realistic model.
Injections
The addition of income to the CFI is known as Injections. Injections take the form of;
1. Investment (I)
Investment of firms in the production of capital goods is an addition to the CFI.

2. Government Spending (G)
Government is the major buyer and employer in the economy. It spends on goods and services and salaries and wages.
Majority of income is injected into the economy from the government.

3. Exports (X)
Domestic households and firms receive income by exporting goods and services abroad. It is an injection of income into the economy.

Leakages
The outflow of income from the CFI is known as Leakages. Leakages take the form of;
Savings (S)
Saving refers to that part of consumer income that is kept aside for future use. It is a leakage as it does not come into the CFI in the form of household spending.

Taxes (T)
Taxes levied on income and spending is a withdrawal form the CFI.

Imports (M)
Import of goods and services is followed by an outflow of currency. Therefore, it is a leakage.

Equilibrium
Equilibrium refers to a state of balance. The national Income is said to be in Equilibrium when Injections are exactly equal to Leakages. Therefore, (I+G+X) = (S+T+M).

When (I+G+X) > (S+T+M), the value of CFI increases leading to a rise in employment and National Income.

When (S+T+M) > (I+G+X), the value of CFI decreases leading to a fall in employment and National Income.