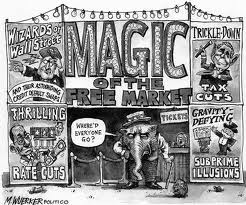 Market Economic System is an arrangement where all the economic questions are answered by the price mechanism. Examples include; , .

Market Economy is also known by the following names;

·         Market Mechanism
In the Market Economy the basic decisions about the allocation of resources are determined by the market forces of demand and supply.

·         Capitalist Economy
Market Economy is so-called due to the rights of ownership and control of resources possessed by individuals.

1.    Private Property Right
In a market economy, individuals have the right to own and dispose of real assets. They also have the right to get income from those properties in the form of rent, interest and profit.

4.    Profit Motive
The main aim of production is to maximize profit.

5.    Price Mechanism
Price mechanism refers to the process by which prices are determined by the market forces of demand and supply.

In a Laissez Fair Economy, resources are allocated by the price mechanism. When demand for a particular good increases, it will become more scarce and its price will increase. As it becomes more profitable firms will use more resources for its production. When the demand for a particular product falls its price falls and it becomes less profitable. Few resources will be used for its production now.

In a Market Economy changes in price act as a signaling device to producers and consumers causing them to change their plans.

6.    Consumer Sovereignty
Consumer Sovereignty refers to their ability to determine what is produced by means of their purchases. Under Free Market Economy, producers will produce only those goods which are demanded by consumers. Hence, the consumers are treated as “uncrowned kings”.

7.    A very Limited Role for the Government
The government has very few economic functions to perform in the Market Economy. It maintains defense and justice in the country.

Advantages of Market Economy
1.    It quickly responses consumer wants. It is the decisions of consumers that influence production.
2.    Consumers get a wide range of goods. Producers are encouraged to produce what consumers want due to the existence of Freedom of Enterprise.
3.    Profit motive encourages the use of better methods of production. It would reduce the costs of production and prices.
4.    Economic Agents like consumers and producers have more freedom of choice.
5.    It encourages competition between firms leading to greater efficiency.
6.    Foreign Investment is encouraged due to lower government intervention.

1.    The existence of private property right and profit motive enables some people to acquire excessive market power leading to greater inequalities in the distribution of income and wealth.
2.    Factors of Production will be employed only if it is profitable to do so.
3.    Market Economy is subject to booms and slumps. It creates uncertainty.
4.    Capitalist Economy does not fully take into account the social costs and social benefits.
5.    It does not provide public goods and merit goods.
6.    Goods and services required by the poor may be under produced due to their lack of purchasing power.
7.    Free Enterprise Economy may encourage the consumption of harmful goods.
8.    There is no guarantee that everyone who wants a job will be able to get a job.
9.    Market dominations by giant firms limit competition and exploits consumers.